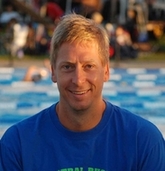 STU KUKLA is the Head Coach of CBST with over 20 years of coaching experience in a variety of locations and levels.  He is an ASCA level 4 coach (American Swimming Coaches Association) that has worked with Olympic Trial qualifiers and Olympians as well as numerous Senior National and Junior National level swimmers.  As head coach of CBST he has overseen the development of the team from its infancy, in the fall of 2005, to a team of 160+ senior and age group athletes which include Olympic Trials, Senior National, Junior National, Sectional, Zone, and Junior Olympics qualifiers.  He has built CBST into a USA Swimming Silver Medal winning program and has placed multiple athletes onto the Junior National team. He is most proud of the large number of CBST athletes that have gone on to swim in college at the Division I, II, & III levels. Prior to taking over at CBST Stu was an assistant coach at Germantown Academy under nationally recognized coach Dick Shoulberg for 3 years.  While at GA he was an assistant for the woman’s team that won the 2005 National Championship.  Prior to that he was head coach of the Upper Moreland High School boys, where his swimmers earned All-State honors in multiple events.  Before beginning CBST Stu also coached the Upper Dublin Aquatic Club (UDAC), in the Suburban Aquatic League, for 9 years and taking that team to its first and only league title in his final year.  Stu earned his Bachelors degree from Ursinus College, with a major in History and a minor in Elementary Education, and earning his Masters degree from Arcadia University, in Education.  He is dual certified in Elementary Education and Secondary Social Studies.  Stu is married to Amanda Kukla and they have two sons, Seaton and Bryce, and a daughter, Sky.
﻿

MATT SCANLAN  joined the CBST coaching staff in 2017, bringing with him 18 years of aquatics and coaching experience from a variety of levels.  Matt is an ASCA Level 1 Coach (American Swimming Coaches Association).   He began his coaching career as a high school student, when he coached swim teams and developed learn to swim programs at various recreation centers throughout Philadelphia.  Most recently, Matt served as an Assistant Swim Coach for the Salvation Army Kroc Aquatics (SAKA) Team, formerly the Philadelphia Department of Recreation (PDR) Swim Team.  While with the Salvation Army, he played an integral part in creating and developing the SAKA Swim Team from 2011-2017.  Matt also served as the SAKA Meet Director, Administrative Official, and Swim Camp Director.  He is also certified as an American Red Cross Water Safety Instructor and Lifeguard Instructor.  Matt attended Widener University, where he earned his Bachelor’s Degree in History and Secondary Education.  He later attended St. Joseph’s University for Graduate School and earned his Master’s Degree in Education Leadership.  Matt is certified as a teacher in Secondary Social Studies, Secondary Biology, K-12 Environmental Education, K-12 Principal, and K-12 Curriculum Supervisor.  He currently teaches Environmental Science at C.C.A. Baldi Middle School in the School District of Philadelphia.  Matt was a competitive swimmer in the CYO during grade school, CYSL at Father Judge High School and in the MAC Conference while at Widener University, where he finished his competitive swimming career with two Conference Championships in 2000 & 2001. He is married to Jamie Scanlan and has two girls, Aisling and Kieva; and a son, Declan.​

CHRIS SKABLA started swimming at the age of five and swam for various club teams in Bucks County until the age of 18. In college, he swam for West Chester University, and was on the 1999-2000 PSAC Champion Team that was ranked in the top five nationally in Division 2.  Chris studied Psychology at West Chester University. Chris has been coaching for 18 years. He has coached at West Chester, ACST, Springhaven Country Club, and Neshaminy Core, and CBST.  At each club he has experience coaching all age groups and skill levels.  At Neshaminy Core he had the opportunity to coach various State qualifiers including 2 top ten finishers. Chris has been with CBST since 2010.  While at CBST he has worked with Qualifiers and Champions in The Junior Olympics, Senior Champs, Sectionals, States, Junior Nationals, Senior Nationals, and The Olympic Trials.